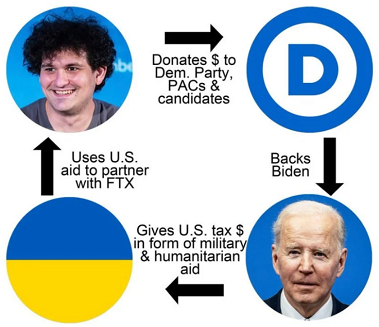 The FTX scandal broke in the days immediately prior to, and following the November 8, 2022 Midterm elections. Tens of billions of dollars in American Military Aid to Ukraine, which was allegedly to be used to fight Russia, was cash that Ukraine did not use to fight Russia, but instead invested into FTX cryptocurrency exchange. Ukraine received money from the United States, Ukraine "invested" the money with FTX, and FTX "donated" the money back to Democrats, who originally voted to send the money to Ukraine. The sham appears to be pure criminal money-laundering and criminal conspiracy to violate campaign finance laws.[1]

FTX, a company valued at $32 billion, never had board meetings. Neither did most of the subsidiaries. FTX had no cash management system. Management had no idea how much cash was on hand at any given time, or even where all their cash was. FTX didn't keep proper records of who they employed. Employees and contractors co-mingled throughout the different companies without proper documentation of how they spent their time. Employees submitted expense reimbursements over chat. A random manager would accept or reject those reimbursements with an EMOJI. Very few records were kept. Most decisions were made over chat, with the messages automatically deleted after a certain time.

Corporate funds were used to purchase personal use real estate. And employees & executives put their names on homes purchased with company funds.

Crypto deposited by customers weren't even recorded on the balance sheet. Presumably, all crypto assets just went into one central slush fund used for whatever.

Biden regime chair of the Securities and Exchange Commission (SEC) Gary Gennsler approved "no action relief" for FTX, meaning a letter saying 'if you do X in this way, while technically against SEC rules, we won't come after you'.[3] Bankman-Fried met with top Biden adviser Steve Ricchetti on April 22, 2022 and May 12, according to White House visitor logs.[4]

Elon Musk commented that Sam Bankman-Fried was a major Democrat donor, so there would be no investigation.[5]

The FTX crypto slush fund run by Sam Bankman-Fried and his MIT college buddies laundered money for Ukraine into nearly $40 million worth of campaign donations for Democrats in the 2022 Midterm elections. In 2022 Joe Biden and the Democrats pushed through $65 billion in funding for Ukraine, using US taxpayer money. Internationally, over $100 billion has been donated to Ukraine, according to www.Devex.com which has compiled worldwide donations and grants to Ukrainian. The corrupt Zelensky regime partnered with a corrupt crypto slush fund to take tax payer dollars from corrupt US government officials and funneled them into the hands of corrupt Democrat candidates to win rigged 2022 Midterm elections.[6]
From a cash flow perspective, FTX's bankruptcy filing on November 12, 2022 stated that FTX had zero bitcoin assets despite having $1.4 billion in bitcoin liabilities.[7] From an overall perspective, the filing revealed that FTX had almost zero assets and from $10-$50 billion in liabilities. Among those liabilities were “investments” made by the Zelensky regime
The far-left Washington Post reported on March 3, 2022 that the Zelensky regime was dealing in crypto.[8] The Ukrainian Ministry of Digital Transformation announced “Jointly with the blockchain company Everstake and the cryptocurrency exchange FTX, we’ve launched the website “Aid For Ukraine” to collect crypto for supporting the army.[9] Bankman-Fried announced that FTX will be helping the Ukrainian Ministry of Finance in collecting crypto donations.[10]

Up until its bankruptcy filing, FTX was a 'partner' with the World Economic Forum (WEF).[12] The FTX CEO's aunt, Linda Fried, is on the board of the WEF.[13]

Sam Bankman-Fried's mother, Barbara Fried, is the founder and president of a left-wing Super PAC called ‘Mind the Gap’ (MTG) dedicated to helping Democratic political candidates win elections. The PAC earns millions of dollars in donations primarily from Silicon Valley executives "who are keen on quietly funneling massive political donations into the Democratic Party." The mission of MTG is to “empower private political donors to strengthen our democracy by providing them with evidence-based guidance on the electoral strategies, tactics, and programs that are likely to achieve the greatest impact in a given election”, according to Influence Watch.[14]

Barbara Fried is alleged to have broke IRS and election laws while sending 15 million partially completed ballots for ballot harvesting and to steal elections in the United States in 2020 and 2022. The IRS permits 501(c)(3) nonprofits to conduct nonpartisan voter registration drives, but not registration drives that have the effect of favoring one party over another.[15]

The New York Times, in partnership with WEF partner Accenture,[17] was planning on to hold its DealBook Summit on November 30, 2022 featuring Sam Bankman-Fried, Ukrainian dictator Vladimir Zelensky, Blackrock CEO Larry Fink, and Biden Treasury secretary Janet Yellen as the main speakers at a cost of $2,400 to attend. The event was scheduled for three weeks after the scandal erupted and became public.

Others to be included in the event were Mark Zuckerberg, New York mayor Eric Adams, CNN host Van Jones, Amazon.com CEO Andy Jassy, Netflix founder and CEO Reed Hastings, TikTok CEO Shou Chew and former Indian governor Mike Pence. The event was billed as bringing "together the most consequential people at the intersection of business, policy and culture that are impacting society. The conversations this year will address the complicated, turbulent global landscape and seek to find solutions for the future of business, tech, policy and more.”

See also: Essay:Ivermectin Given A Fair Hearing to Treat Covid

FTX funded 2021 trials that denied effectiveness of early treatment options for COVID-19 including  Ivermectin  and HCQ.[18]